As the only Seventh-day Adventist institution of higher education in the Middle East, and as one of the first Protestant colleges in Lebanon, Middle East University has a storied and inspiring past. Having celebrated its 80th anniversary in 2019, the university community has had the chance to recently review its history, as can be seen in these historical pictures.

Select a picture to read a description.

How It All Began

The history of Middle East University began in 1908 when George Keough and his wife, Mary (Alderson), from England arrived in Egypt where he would serve as a pastor and administrator for the next 20 years. As Pastor Keough witnessed the Seventh-day Adventist Church in the Middle East, he keenly sensed the need of starting a training center for the young people of the region. If God’s work was going to grow at all, He needed workers in the next generation who could speak. The progressive idea never left him as he returned to his homeland where he taught in the religion department of Stanborough School and Newbold College.

In 1937, he responded quickly to an invitation to be in charge of the work of the Seventh-day Adventist Church in the Middle East. As he did so, it was with deep conviction that the opportune time had come to start a college where young people would receive a well-balanced training for Christian service in their respective homelands. He discussed the idea with others. They accepted it without hesitation, so plans were laid for carrying out a compelling but adventurous project. In the process of launching the concept, church leaders visited London and interviewed George’s son, G. Arthur Keough, who was principal of the church school in Stanborough Park, Watford in England.

Not long after, he was officially asked to open a new school in Beirut. Arthur had been born in Egypt, had learned Arabic as a child, and was familiar with Middle Eastern culture; it was the natural thing for him to do. Only a few months later, Arthur, his wife Dora, and their daughter Gillian, sailed from the shores of England and eventually landed in Beirut, Lebanon. It was an act of faith and the beginning of the journey we continue today.

In 1939, Keough helped establish the Adventist College of Beirut, located in the Beirut neighborhood of Mouseitbeh. The institution was relocated in 1946 to its present location in Sabtieh, Sad El-Bauchrieh. During the same year, it was renamed Middle East College, and the cornerstone of what is now North Hall was laid by His Excellency Sheikh Bechara El-Khoury, the first president of the Lebanese Republic.

In 1949, the Lebanese Ministry of Education and Higher Learning granted the institution the accreditation to offer studies in higher education. On June 28, 2001, Middle East College was formally and legally renamed Middle East University (MEU). This significant development further validated the role of MEU as an important center of higher education for the people of Lebanon and the Middle East.

A Brief Timeline of Our History

The institution was originally established as Adventist College of Beirut. 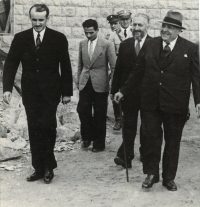 The institution moved to its current location in Sabtieh. In the same year, the Adventist College of Beirut was renamed to Middle East College by His Excellency Sheikh Bechara El-Khoury.

Middle East College was granted accreditation by the Lebanese Ministry of Education to offer studies in higher education.

When the civil war began, Middle East College remained open and God’s hand of protection was continually over it.
The institution was granted University status with three faculties. It was renamed to Middle East University and became an important center of higher education for the people of Lebanon and the Middle East.

As MEU grew, an additional faculty was added:  Faculty of Arts and Sciences.

The President of the Lebanese Republic, Mr. Michael Suleiman, signed the formal approval decree issued by the Minister’s Cabinet.

MEU was approved as a Receiving School in the Adventist Colleges Abroad program (ACA).

Middle East University made a significant advancement to providing year-round theological training, and entered into partnership with the Middle East North Africa Union of the Seventh day Adventist Church to provide training programs and educational services for their immediate needs.

Middle East university transitioned in affiliation from Griggs University to Andrews University, allowing students to receive an Andrews diploma while studying at the MEU campus.

Back to top
Go to Top